Louisiana Words History: James Leland Ludeau III (The Rebel with the Right Cause) & Words of Acadiana 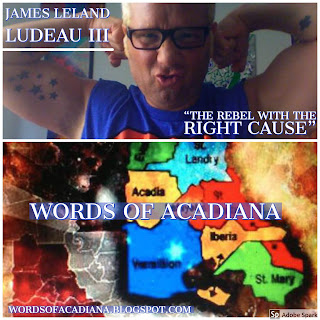 In March 2013, photographer, James Leland Ludeau III, emerged as the biggest supporter of Louisiana Words and had already contributed many poems to the blog because of its initial focus as an outlet for the freedom of self-expression. When Louisiana Words merged with Acadiana Pride Festival, the focus of building the festival became the mission of Louisiana Words and Louisiana Words: The Series, started by President, Louis Toliver Jr, and Vice President, Ted A. Richard. James was the primary helper getting the word about the public reading series together with Louis. James equally matched Louis's passion. James saw Louisiana Words as a wonderful opportunity to help people express themselves, but wasn't aware that this would be the core platform to launch awareness of Acadiana Pride Festival. Louis had formally assumed position of Acadiana Pride President at this point. Thus neither Louis nor James expected the building of the festival to overshadow the initial mission of Louisiana Words. So the freedom of self-expression that represented the cause had to become tamed and had to be respectful and cautious of its content to help the festival happen. James recognized two problems immediately during the first show: 1. Louisiana Words was off message and had broken away from what it represented. 2. The focus was solely on Louis as the president and the pride agenda. James broke away immediately and begin working on a project that he and Louis called Words of Acadiana (wordsofacadiana.blogspot.com), specifically for the central Acadiana area. Louis created the design and asked James about creating a separate Words blog and leading it. James was fueled to stick with the original cause and what he was certain was the right cause. James quit contributing to Louisiana Words for the entire summer of 2013, May to August. He finished creating the blog for Words of Acadiana and began to rival Louisiana Words. James was able to gain half of the followers that pride had by himself alone without any organizations help. Louis was impressed that James had the ambition and drive to match Louis's passion. Louis understood James concerns and wanted a good relationship with James because they really cared about each other. Both were passionate about self expression. At the end of August 2013, Louis and James reconciled. Louis apologized to James for being blindside by Louis's ties to Acadiana Pride Festival. Being that James had no interest in the festival's mission, Louis saw James as a free-spirit to do what Louis would not be able to do under the wing of Acadian Pride Festival. Louis encouraged James to continue Words of Acadiana so they he may have the freedom to do as his heart felt, and asked him to co-host the series with him. From that point, James was referred as the creator of Words of Acadiana. James found his own writers outside of Lafayette and helped Louis find writers as well. Louis and James were so close that they were seen as inseparable and people recognize each as a pair. Louis and James were so close and bonded they began to write many poems and short fictions called duets together. Being that James's main focus was photography, James ended Words of Acadiana in 2015; however, James revived Words of Acadiana, this year, in June 2019! He is also honored as the 1st Allstar of Louisiana Words with over 100 contributions!

Popular posts from this blog

August 19, 2019
When I find myself alone in the pain. When I feel like I have absolutely no one to turn to. When I wish the hurt would stop. When I don't know what to do. When I feel completely lost. When my eyes just won't stop welling up. When I don't want to bother anyone with my hurt, my pain. When I know that everyone has other responsibilities. I don't want to interrupt them with my hurt. When I have thought about all of the ways to make the hurt stop. When I am tired of putting on my strong face for others to see. When I am tired of the tears welling up, filling already soggy eyes. When I am tired of the tears, tears that roll non-stop over my cheeks. When I don't want to hurt the ones that I love the most. When it seems like those who are supposed to love me don't get who I am. When no one has any idea of the pain my smile hides. When I am worried about being forever labeled by others. When I am the one that everyone counts on for strength. When I never show any weak…
Post a Comment
Read more

May 10, 2019
Being the 1st singer to bring her talents to Louisiana Words, Sasha has never had a place she felt she could not only sing, but also express her passion for expressing the triumphs and failures of pursuing her dream of singing. Making her appearance in Fall 2018, she is the fastest writer to go from the Newcomer to Allstar in the history of Louisiana Words. She is now also the lead singer of Rhythms and visions. She is currently in the process of becoming the first Director of Music for our Louisiana Words family. Let’s welcome Sasha to our family and give her the support she needs to showcase her singing/writing for Louisiana!

All of Us (Sasha Massey - Lafayette, LA)

May 12, 2019
We have so few days to be good to people. No matter how hard they work against an established pattern or what little good they acknowledge in themselves. What remains is that while we live and learn we have to keep teaching. The choice to help the poor or shame them can be taught.  Aside from biases set up to defeat black and brown people we have what seem to be the same chances as anyone. It’s a bitter thing to live every day with the stress of fear and exclusion, but when we choose good it makes the world better. People folding up like lawn chairs for a lie they were sold are just as likely to turn away and accomplish true good in the world. Hate, poverty, and the violence and limitation of rights of women are not ‘us or them’ problems. They are Human problems. We can solve them. We can heal the world if we work together for good. To protect children. To grant every access to a full education of their home, our world which further enriches and improves the future they will grow up i…
Post a Comment
Read more